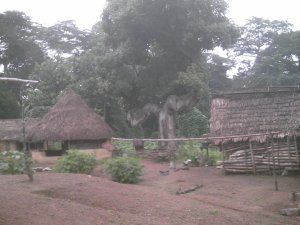 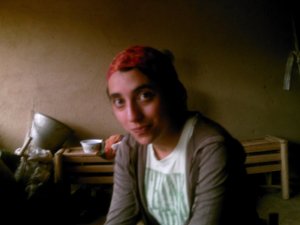 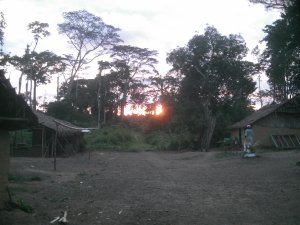 Went to the forest again last weekend. Heard there were elephants in the area but have yet to see any. There was another peacebuilding meeting. Yes, Matt, the put the sign up, I took a picture for you.

Did I negatively affect the process? Sitting in the meeting, overheated and dehydrated, I wondered if my presence at the meeting last month was the reason that little had been discussed in terms of the actual dispute. Possibly, my hesitance could have informed the group, particularly with this unfamiliar person taking notes. This time, B was there. B is amazing.

Side rant about B. This woman is tough as nails, stronger even than my mom (which is saying something, though she does remind me of you, Mom!), and can convince a crowd of grumpy men that what they’re arguing about is actually pretty funny. And she uses her talents in a timely way (so as not to laugh at the actual dispute that is in question, the tiny lot of land that is prolonging this ethnic based animosity). She picked up her niece on our drive home because “she had to get out of there” and to bring her to Gbarnga. No questions asked.

The process. As I mentioned, the dispute is between the Lorma and the Mandingo. If you look at the history, the groups got along well before the war, though there was some underlying tension. The Mandingo are Muslim and traditionally traders. They were kind of forced to be traders since they weren’t allowed to own land for a while. They also claim that they are not Liberian, instead they are descendents of Muslim traders who traveled through Liberia. Ellis claims that they are in fact descendents of the traders slaves, which may be why the Lorma did not more fully integrate with them. They got good at trade and are now more profitable the most farmers. This led to some disputes. If the Mandingo have all the money and the traditional Lorma (who claim the land as having been rightfully theirs through history) have less, then any land the Mandingo claim becomes controversial. It’s kind of like the Israel/Palestine conflict only switch the Israeli’s to the Muslims and the Palestinians to the traditionalists and decrease the current severity.